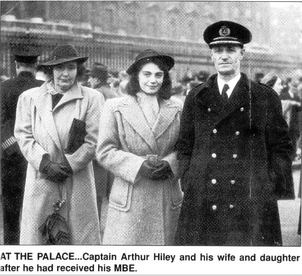 When a German E-boat opened fire at Arthur Hiley's ship it was clear that the shooting was aimed at the bridge on which he was standing. But the enemy': tracer bullets missed their target. Next the E-boat attacked with a torpedo and that, too, was narrowly wide of the mark. Then, with the first salvo from their main gun, Hiley and his crew blew the enemy out of the water.

Ernest Smith spent many days and nights involved in the desperate struggle to free North Sea shipping lanes from the peril of German-laid mines. How many lives he saved in that way remains impossible to assess, but he was also responsible for the rescue from the sea of more than 100 Allied airmen.

Hiley and Smith played out their wartime roles in different ways. Yet they had much in common. Both had mastered the skills of a straight line for the bridge, all the shots passed over my ship. Then we saw the phosphorescent track of a torpedo as it passed harmlessly under our stern. The 12 - pounder gun on our stern now opened fire and after the first shot the E-boat disappeared. At the time the E-boat was under way, leaving a white wake behind her. This wake came to a sudden stop as our shell struck home.

But Captain Hiley and his crew had no time to celebrate their moment of success. Immediately after disposing of the E-boat they heard seamen calling for help in the sea. The cries came from survivors of a ship sunk by the enemy's action, and in the space of 11 minutes all were safely hauled aboard Hiley's vessel. Soon afterwards they rescued the crew of another convoy ship which had also fallen victim to E-boat attack. A few hours later the convoy was dive-bombed by German planes before the enemy were finally driven off by British fighters. So ended what was just another day in Arthur Hiley's war.

Early in the conflict, commanding the Goole-based S. S. Rye, he had skillfully maneuvered his ship so that it became the last British, vessel to escape from Holland as the Germans attacked the Low Countries. Just after the Dunkirk evacuation, Hiley s vessel picked up 28 French soldiers who had escaped from the beaches in a small boat. Later his ship rescued three British soldiers and a Frenchman escaping by boat from Cherbourg.

Born in Goole, Arthur Hiley had first gone to sea at the age of 14, serving aboard wind jammers. His involvement with steam began when he joined Goole Steam Shipping Company as a third officer in 1916. By 1929 he was master of the S. S. Derwent. Goole born, Ernest Smith went to sea after initially working for the Goole Times. He sailed deep sea and in local vessels, commanding the S.S. Sanfry before he became a Humber pilot in 1937. He died in August, 2000, in Guildford, at the age of 92.