There is an immigration record showing Capt. Depledge arriving in Boston Mass. USA. on 6 July 1935, the ship having left Russia.
This would have been the SS Temple Pier.

The SS Thomas Walton was torpedoed (U38) in December 1939, 13 of the crew perished, my Capt Depledge and the remainder of the crew including the Master were picked up by the German Merchant ship the SEBU and the German master making amends for the U-boat action landed the crew in the Norwegian port of Bodo. Capt Depledge was back at sea the following month; discharge reference reads, “He was obliged to leave the SS Thomas Walton owing to enemy action”.

Capt. Depledge was on the Frances Dawson for all of 1940. The achieve record shows that the ship sailed to Casablanca, Gibralter, Almeria (Spain) in Feb/March. Records of this ship show that in the latter part of the year he went to Canada at least 3 times, places included Halifax, Monteral, Sydney, Three Rivers . The record shows that the ship was slightly damaged by gun fire 8 October off the Mumbles.
​
Alien Registration Receipt Card issued Aug 7 1941 for Norfolk VA, showing that Capt. Depledge was on the Atlantic Convoys at the height of the battle with the U-boats, he was at that time on the Empire Leopard. 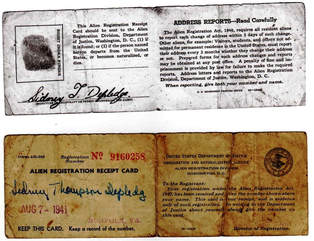 In April 1943 on board SS Trevorian he was in Suez, I have his Shore Leave Pass dated 27.4.43, my brother believes he was out to the far-east on this trip which is recorded as 1 year 4 months 23 days, he sailed from and returned to Hull. He was on this ship for one trip taking him from Immingham May 1942 to, Rosyth, Mombasa (Kenya), Durban (South Africa), Diego Suarez & Tamatave in Madagascar, back to Durban on to Aden, suez, Pt.Said (Egypt), Columbo & Calcutta (India) back to Aden, Suez. Pt. Said, Alexandria, Tripoli (Libya), Bizerta (Tunisia), then Gibralta and home. Dad left this ship in Dundee on 12 Oct 1943, the ship is recorded as sunk in a collision off Aberdeen in November 1943 (what a pity for a ship having completed such a journey in wartime).

On the S S Marlwood his discharge references state that in addition to 1st mate he acted as “pilot” and “relief Master”.

After leaving Trevorian he was on board Winona for a month, he spent the remainder of the war in Home Trade on board Seafisher and the Helmwood, largley between Blythe and Gravesend or Liverpool.

On leaving the Merchant Navy in 1950 he became a Goole pilot stationed in Hull, there he remained until retiring due to ill health.

Providence, Coincidence, Superstition and a Lot of Luck.
by
Michael Depledge

​For generations the male members of my family had been ship owners and master mariners sailing out of Goole. Inevitably my father was destined to go to sea, and at sixteen he was indentured to the Coronation Steamship Company, he then joined the SS Temple Pier and set out on a three year voyage to and around the Far East, carrying cargo between many Asian ports. In 1939 he joined the SS Thomas Walton carrying iron ore between Narvik, in Norway and Port Talbot in South Wales. On the 7th December 1939 his ship was torpedoed by U 38, inside Norwegian waters close to Narvik. The ship sank quickly and thirteen members of the crew of 43 were drowned. A passing merchant ship stopped and picked up the survivors and at that point U 38 tried to torpedo this vessel as well. This ship turned out to be a German Merchantman, the SS Sebu, the survivors, having been pulled from the sea were treated well by the German Captain and they were landed at the nearby port of Bodo, from where they were able to take ship back to Britain. They could of course have been taken back to Germany and they would have been Prisoners of War for six years. Judy and I have been to Bodo whilst on holiday, it is an austere place but would have no doubt been most welcoming to the crew of the SS Thomas Walton in December 1939. We have also sailed over the grave of the Thomas Walton, it was an eerie feeling knowing that I was so close to my father’s old ship and where, as he used to say, his binoculars and sextant would still be hanging up in his cabin. We were there on a bright sunny spring day, what it would have been like in a lifeboat, on a dark, cold December night is impossible to imagine.
My father joined a new ship, the SS Francis Dawson in January 1940, and with the exception of one voyage round the Cape to Egypt, spent the rest of the war on this and a number of other ships, on North Atlantic conveys. His luck continued, one of his ships was strafed by an enemy aircraft whilst in the Bristol Channel and two were sunk shortly after he left them.
My father stayed at sea until 1950 when he became a Humber Pilot, thus being able to spend more time at home, but still working irregular and long hours. I have many happy memories of being on the river with him, either on the Pilot Cutter on ships that he was piloting.
I am writing this on June 6th 2014, 70 years on from D Day, when my father was involved at sea, and exactly 33 years since he died. My mother and he were on holiday in Jersey when he was taken ill, they had travelled by ferry, it was not a fine merchantman and my father was not at the wheel on the bridge, but my mother said that he was happy to be at sea again. I remember going to Jersey and managing to speak to him just before he died. I arranged for his body to be flown home – he would not have liked that, he was a sailor and hated the idea of flying.  In common with most of the events of his life the timing of his funeral was governed by the tides, so as to allow his work colleagues to attend.
Finally superstition – Thompson Depledge, his grandfather, was captain of the SS Westerdale which sank in heavy weather in the North Sea in September 1929. As already mentioned my father’s ship was sunk in 1939. Apparently prior to each occasion members of the family had been singing “Eternal Father Strong to Save” and this was taken as an ill moment. Consequently it was agreed that, within the family, no one would sing or listen to this, the sailors hymn. I was instructed to stand in silence   whenever it was sung in church or school and to turn the radio and TV off   if it was played on the air. My mother subscribed to the view that it was a good omen as both lives were saved, I tend to agree with her but I know that my brother still follows my father’s instruction. 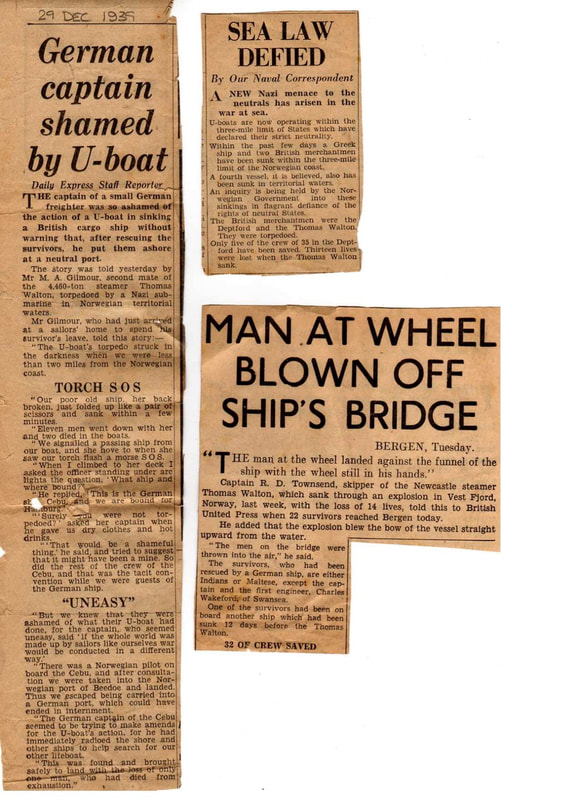