A representative of a third generation of Goole master mariners Captain John Richard Goodworth, died in the Bartholomew Hospital on Sunday at the age of 51 years after a brief illness following an operation. His grandfather and father both also named Richard, traded from Goole, and too were employed by the Bennett Steamship Company, Ltd. With whom their descendant served most of hid working career.
Captain Goodworth had not been enjoyed the best of health for some time, although he was working just before the operation he underwent a fortnight ago. The operation was apparently successful, but complications intervened.

The Goodworth family has been connected with the port of Goole for many years. Captain Goodworth’s grandfather was a “character” and in the schooner Isabella Pratt was on time charter with the late John Bennett at the time he was heavily engaged in the Scotch potato trade .His late father was master mariner with the Bennett line most of his life.
At an early age the late Captain Goodworth commenced his seafaring career, and he joined Bennett’s as a youth, serving with them in every capacity, at the age of 28 he became master, his first command being the Malt. Subsequently he was captain of every ship in the line, and in later years mainly with Syria. He was one of the best known figures in the Humber and Boulogne fruit trade.
Captain Goodworth’s coolness and forethought were the admiration of all who knew him, and these qualities were strikingly demonstrated during the war period. He was captain of the Burma when she was mined with the loss of eight lives off the Thames Estuary on 23rd June, 1916. He stood by the vessel until every member of the crew had joined the destroyer which came to the rescue and brought off the ships papers. On that occasion his calmness set a fine example to the crew and probably saved further loss of life. Of the eight deaths, six were due to the explosion of the mine and two drowning. His employers were always highly appreciative of his ability.
Captain Goodworth, who lived at 102 centenary Road, Goole, leaves a widow and four daughters’ two of whom are married.

The funeral took place at Goole Cemetery on Tuesday afternoon, the Rev W A Williams officiating 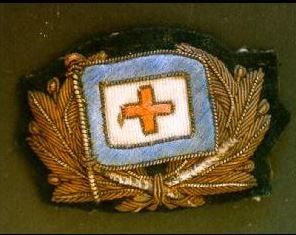 ​Embroidered cap badge with the flag of the Bennett Steamship Co.
and a wreath surrounding it.
The badge was worn by Captain J. R. Goodworth of the 'SS Burma' which struck
​ a mine in the North Sea on 23rd June 1916